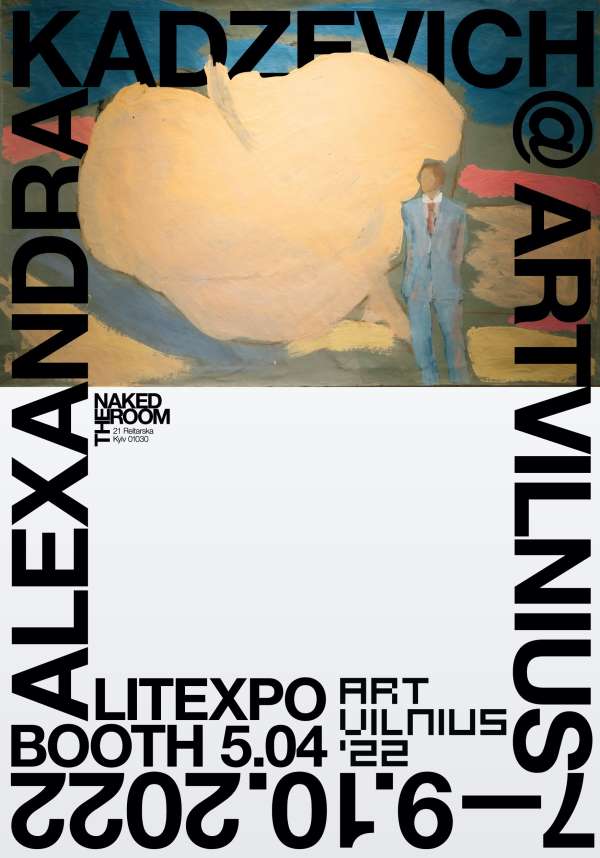 The Naked Room is pleased to announce the gallery’s second fair participation this fall season – its premiere at ArtVilnius (October 7-9). We invite you to visit us at booth #5.04 where we feature a focused solo presentation with a series of paintings by Alexandra Kadzevich: A Souvenir Landscape (2021).

The Naked Room cannot be more grateful for a generous support from ArtVilnius organizers and the team that made our participation possible.

Alexandra’s starting point for the paintings is rooted in a deeply personal story: After her grandfather’s death she inherited a box of filmstrips which not only led to the discovery of a new chapter in her family’s history but concurrently a new approach in her artistic practice. The result on view are large format paper paintings reminiscent of banners with Alexandra dissolving the last remnants of figurativeness into a sheer flow of colour and texture.

With further additions to the display comprising of objects linked to Alexandra’s family, the viewer is invited to dive even deeper into the intimacy of Alexandra’s world at Art Vilnius. A checklist of wired films from the box. An old guideline for the use of an exposure meter with the man on the cover eerily/astonishingly resembling her grandfather. Two vintage lamps that bring back the spirit of this particular era. To quote Alexandra:

«After my grandfather died, I inherited a big box, full of filmstrips. There were a great number of carefully cut pictures arranged in special boxes, and a large archive which had its own logic, unrecognizable to anyone else. I knew that he took photos, but I had never seen the images.

They turned out to be truly close to me — desert landscapes, bewildered small people. Grandpa had tried to seize and preserve what was around him, to capture the real. His photographs show the endless routine that he observed in the world during his travels as chief mechanic aboard a ship. The images capture his desire to dissolve into the environment, transferring the story onto film. I don’t know if they were a means for him to permeate the memories of his whole life, or just a way to feel the keys to it in his pocket. But the filmstrips have become the space for a possible encounter with an era in which things, people, and conditions are distantly described and flicker, reminding us about themselves».

Alexandra Kadzevich was born 1992, Odesa, Ukraine. In 2011 she graduated from the Painting Department of the Grekov Art College in Odesa and in 2018 she completed Contemporary Art programme at Kyiv Academy of Media Arts. She is the co-founder of Noch informal art space. In September-October 2019 Oleksandra participated in residencies at Edinburgh Sculpture Workshop and Pier Arts Centre as a part of @SWAP UK/Ukraine Programme of British Council. She was shortlisted for PinchukArtCentre Prize 2020 and MUHI Art Prize 2021. In 2021 she studied at Salzburg International Summer Academy of Fine Arts, Austria. Since 2022 she is a resident at De Ateliers in Amsterdam, The Netherlands. Her works evolve on the intersection of painting and object with integration of drawing, collage, and installation