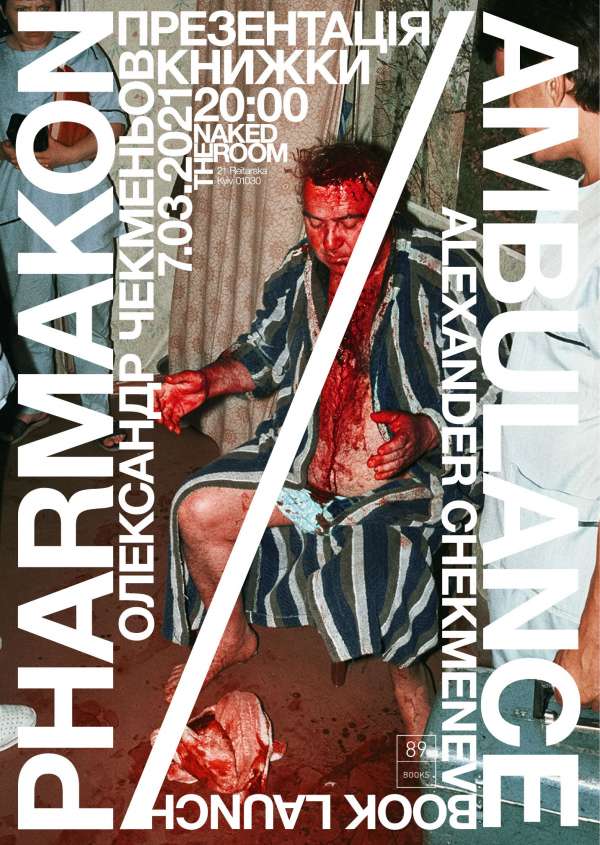 The Naked Room invites to a book launch of a new book Pharmakon / Ambulance by the Ukrainian photographer Alexander Chekmenev, published by the Italian publishing house 89books. The publication features photos taken in 1994-1995 in Luhansk, where for some time the photographer accompanied the ambulance crew and had an opportunity to document their daily work in full. It opens up with an essay by a documentary photographer who has worked in Ukraine for a long time, Donald Weber, entitled The Human is an Atom that Won’t be Split, in which he recounts a story of his acquaintance with Chekmenev's work and the feelings it evokes. The first photos are in black and white, but very quickly the photographer realized that they do not do justice to blood, and there is a lot of blood in the pictures. Some photos are accompanied by short notes by the author, which tell simple stories—who hit whom with an ax, what is a drunk tank and how to bring to consciousness a person in a state of heavy alcohol intoxication. Pharmakon / Ambulance consists of 65 color and 6 black and white photos and has a circulation of 300 copies.

Admission is limited. Please register to book your place via link https://forms.gle/xd8chM7UJFjMeRUQ7

Alexander Chekmenev is a documentary photographer. His publications include Donbass, Passport, Lilies. He participated in the first Kyiv International Biennial of Contemporary Art Arsenale 2012, group exhibition Permanent Revolution at the Ludwig Museum (2018), numerous exhibition projects in Ukraine and Europe.

89books is an independent publishing house based in Palermo, Sicily. Established in 2018 by photographer Mauro D’Agati and curator Kateryna Filyuk, it specialises in photo-books. In 2019, the publishing house also published a book by Boris Mikhailov, Suzi et cetera Part 2, in 2020 Sasha Kurmaz Lust, and currently a book by Serhiy Melnychenko is being prepared for publication.